By Rabbi Jonathan on October 20, 2010 in Cycling, Israel, Travel Dispatches 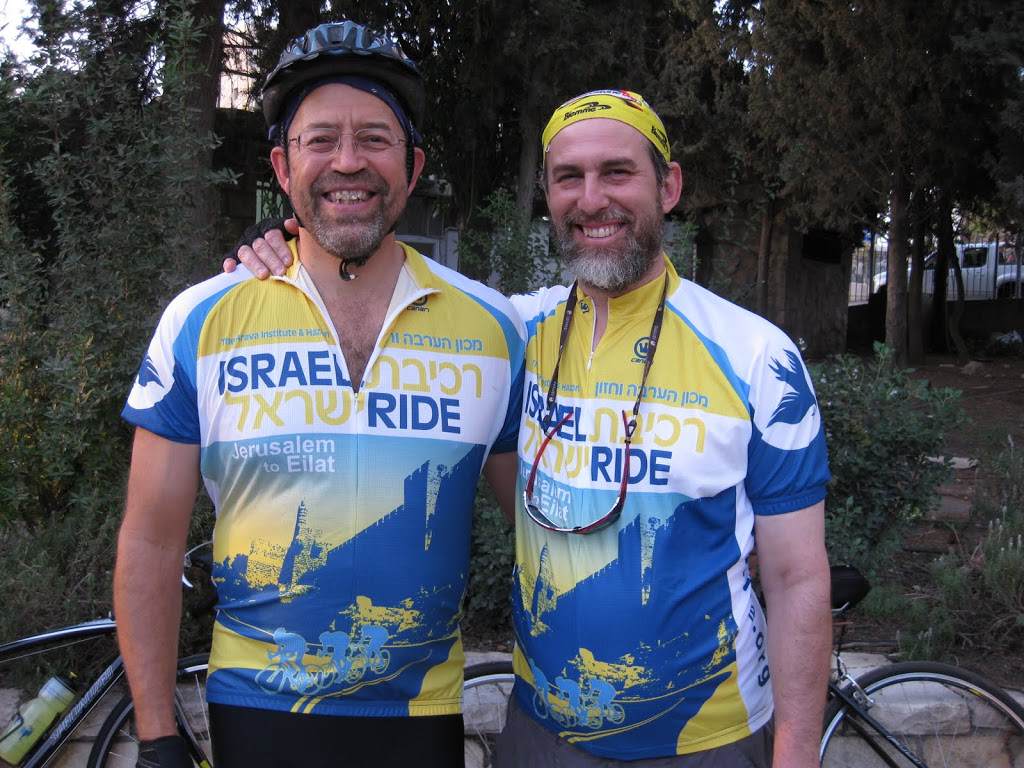 Greetings to all from Israel!

Well, my trip got off to an unexpected and fascinating start. As I emerged on Monday afternoon into the arrivals hall at Ben Gurion airport, I powered up my cell phone and called my friend Melila, with whom I would be staying in Jerusalem. She told me that she was on her way to the monthly Sulha gathering hosted this month by Neve Shalom. Sulha is the Arabic term for a ceremony of forgiveness and reconciliation (like “selicha” in Hebrew), and Melila is a key organizer of this organization. Neve Shalom/Wahat al Salam is a unique Jewish/Moslem/Christian cooperative village, and it happened to be an easy taxi ride from the airport. I told her I would meet her there. I made my way to the Center for Pluralistic Spirituality, a modest building that is a project of the village. The village occupies a peaceful perch on the foothills of the Judean Hills, and despite my jet lag I enjoyed the sweeping view of the coastal plain and the setting sun.

For Israel, the most unlikely collection of people began arriving in a steady stream: Israeli Jews and Israeli Arabs from around the country, and Palestinians from the occupied territories. To help the Palestinians get into Israel, the Sulha organizers had rented vans that waited for the Palestinians to get through the checkpoints, and then drove them to Neve Shalom. To accommodate the travel restrictions that the Palestinians face, the event ended at 10 pm to assure that they could get back across the border before the 11 pm deadline. The Palestinians came from Ramallah and Bethlehem, Nablus and Hebron – all over the West Bank.

Over 100 of us gathered in the sanctuary, squeezed together on the floor. We began with music, as a collection of Arab and Jewish musicians played and we all sang enthusiastically in Hebrew and Arabic simple songs of peace and of the oneness of God. Then a couple of people shared why they felt moved to be there. Boaz, the Israeli Jew speaking, spoke about his son’s death in combat during the Lebanon War, and his decision to create an organization of bereaved families, Israeli and Palestinian, who work together to transform their grief into constructive work for peace. The Palestinian man, whose name I do not recall, spoke of how his relationships with his Israeli friends at these gatherings reminds him that there are good people on both sides, in spite of the intense repression he experiences under Israel military rule.

I should never be surprised about who I run into in Israel, but the next activity surprised me nonetheless. We joined hands and snaked out into a big circle around the campfire. There, Anna Halperin led us in beautiful, simple group movements. Anna Halperin, a vibrant 90, is a pioneer of modern dance whose work I have followed since I was in college. She is in Israel for a screening in Jerusalem of a new documentary about her life. After the dance, enormous pots of food were served and everyone sat cheerfully eating and chatting together. For the final activity of the evening, we broke into groups and answered the question “What events or aspect of your life led you to choose to be here this evening?” Each person’s response was of course unique, but it is fair to say that all of us feel compelled to reach past our fear and anger, and were moved to have the opportunity to be heard by “the other side”.

It is difficult for Americans to grasp how rare an experience this kind of gathering is for Israelis and Palestinians. Everything about the Israeli-Palestinian conflict mitigates against friendly, relaxed contact between Arabs and Jews. At the Sulha gathering I sat next to a sweet young Arab man named Ahmed who works room service at a hotel in Tel Aviv. A toddler came over to us and we each took one of his hands and danced together to the music. Thank God for children! The evening felt strange and wonderful. This event is happening under the radar, by email and phone and Facebook, with literally no funding. There were many young people there, eager and hopeful, ready to speak from their hearts. The Sulha won’t bring peace, but isn’t it good to know that there is a place where these young people can meet, eat, sing and dance together? If you want to support the Sulha you can contribute via this address: The Earthville Networkhttps://www.networkforgood.org/donation/ExpressDonation.aspx?ORGID2=943374090&vlrStratCode=YBoslx4W36G%2bsUd4qe3hBfZwlHQFn2aT5TM8r7RVr2dzpVHUkxTlACf%2bVsdTEYaf

Tuesday was spent preparing for the bike ride, and at 6 am Wednesday morning 120 of us climbed on our bicycles and followed our police escort through the streets on our way out of Jerusalem. The riding was hard today: Israel is in the midst of an intense heat wave, and if that was not difficult enough, for a significant portion of the ride we were pushing into a ferocious headwind. It was grueling, but I was rewarded at the end of the day by an ocean breeze and a swim in the Mediterranean here in the city of Ashkelon.

But this tour is offering much more than bicycling. Alon Tal, the founder of the Arava Institute, offered us teachings and briefings throughout the day. Alon Tal is also the founder of Adam Teva v’Din (humans, nature, and justice), the premier legal advocacy organization for environmental issues in Israel, he is a Professor of Desert Studies at Ben Gurion University, and he is on the Board of Directors of Keren Kayemet L’Yisrael, the Jewish National Fund. In that capacity he chairs the committee in charge of afforestation, the ongoing planting of forests in Israel. He is clearly a powerhouse, perhaps the most important environmental advocate in Israel. I really want to share with you some of what I learned from him; despite the rancorous and largely dysfunctional Israeli governance structure, Israel is making real advances in addressing environmental challenges:

-All the beautiful forests and lush groves that we biked through on our way from Jerusalem down to the coastal plain were planted by hand since 1948: 2.6 million trees. Eyewitness accounts along with aerial photographs of the region taken in the 1930’s show clearly that the hills were completely bare.Israel has learned from its early mistakes of planting monoculture forests of pine trees – the pine trees invited pests that could destroy entire forests. Now varieties of native species are being planted that can better withstand parasites and insects. The JNF has begun a project in Rwanda to share their wisdom and experience, as Rwanda has been almost completely deforested in recent decades. As chair of the committee in charge of planting trees, Alon (whose name means “oak tree”!) has picked up the pace to complete the master plan for afforestation that the Israeli government set in motion in 1995. 75,000 acres of JNF plan are slated for planting over the next 20 years, and when the planting is complete, forests that did not exist in 1948 will now cover a full 10% of Israel. What an amazing accomplishment.

-Israel is addressing the rapid depletion of its aquifers by building massive desalinization plants.These plants take seawater and by osmosis remove the salts and minerals, making the water potable. The plants already on line have added about 10% to Israel’s fresh water supply, and more plants are under construction. Alon pointed out that this alternative fresh water supply will be critical to any possible peace agreement between Israel and the Palestinians, as groundwater supplies are simply insufficient to serve the entire Israeli and Palestinian populations, and the Palestinians’ water needs are at present unmet.

-As we bicycled past vineyards, wheat fields, and olive groves. Bill pointed out that these crops were for ancient Israel the “big three” of sustenance. They were celebrated in the ancient Temple: the lamp was lit with olive oil, the showbread was displayed on a table, and wine was blessed. After the destruction of the Temple in 70 C.E., these rituals were then transferred to the Sabbath table, and to this day we light the candles (which used to be lamps filled with olive oil), we bless the wine, and we bless the challah. In Israel, our rituals attain a whole new depth of meaning as we sanctify the indigenous crops of the land.

-As we neared the end of our ride, we paused at Kibbutz Negba, and Bill brought us into a cemetery with a very large sculpture of a farmer, a laborer, and a soldier depicted in the Socialist Realist style.Founded in 1937 as a hastily constructed wooden stockade, Kibbutz Negba was the frontier of Israel, when the Egyptian army invaded in 1948 following Israel’s declaration of independence. The Israeli forces there had almost no weaponry, as the Egyptian army advanced with tanks and artillery.Negba was battled over repeatedly, and razed to the ground by the Egyptians. 180 Jewish soldiers died in the battles over Negba, but the new nation ultimately held the site. As Bill pointed out, this was but one example of many on which the War of Independence hinged, and if any of those desperate efforts had failed, the new nation might have been overrun, and there would likely be no State of Israel today. Israel was not the military power it has since become; the War of Independence was won with an incredible rate of casualties, lack of armaments, and a will to survive born of one part desperation, one part idealism, and incredible sacrifice and courage.

I would not be able to close this travelogue without explaining that today (on the Jewish calendar) was the 15th anniversary of Yitzchak Rabin’s assassination. It is a sad day in most of Israel. Yitzchak Rabin was a symbol of the generation that founded Israel: a gruff, plain-spoken man, an officer in the War of Independence, the IDF chief of staff during the 6-Day War of 1967, and the old soldier who as Prime Minister determined that he must attempt to make peace and signed the Oslo Accords in 1993 and the peace treaty with Jordan in 1994. The fact that the Prime Minister of Israel was gunned down by a fellow Jew is still almost too painful for most Israelis to contemplate. Last night and today the airwaves were filled with call-in radio shows, live musical tributes and much discussion about the murder and its commemoration. Should this become a day for remembering the man Yitzchak Rabin, or should it become a day for teaching about tolerance and democracy? This is clearly an ongoing discussion in Israel. I too remember that day with immense sorrow. Great leaders, men and women of the moment who transcend their past when new situations demand change, are sometimes impossible to replace, and their societies are the worse off for their loss.Such it is for Israel in the wake of that tragedy 15 years ago.

Tomorrow I see if I am capable of riding more than 90 miles to an isolated retreat center on the Egyptian border. It’s a no-lose situation (except for my ego) because the van picks you up and drives you the rest of the way if you lag too far behind. I’ll write again before the end of the ride.

If you made it this far thanks for reading, and all my best,

View all posts by Rabbi Jonathan →
You Gotta Have Heart: Yom Kippur 5771
Bicycling from Jerusalem to Eilat, Part 2

I imagine that my Jewish self has been attempting to heal since the day I was born into a small Hungarian community of Holocaust survivors. But it was not until I attended Rabbi Jonathan Kligler’s Healing Your Jewish Self workshop that the true healing of my family’s legacy of losses began. For once I was in a safe space where my grief was not pathology but the necessary next stage of growing into my joyful Jewish self.