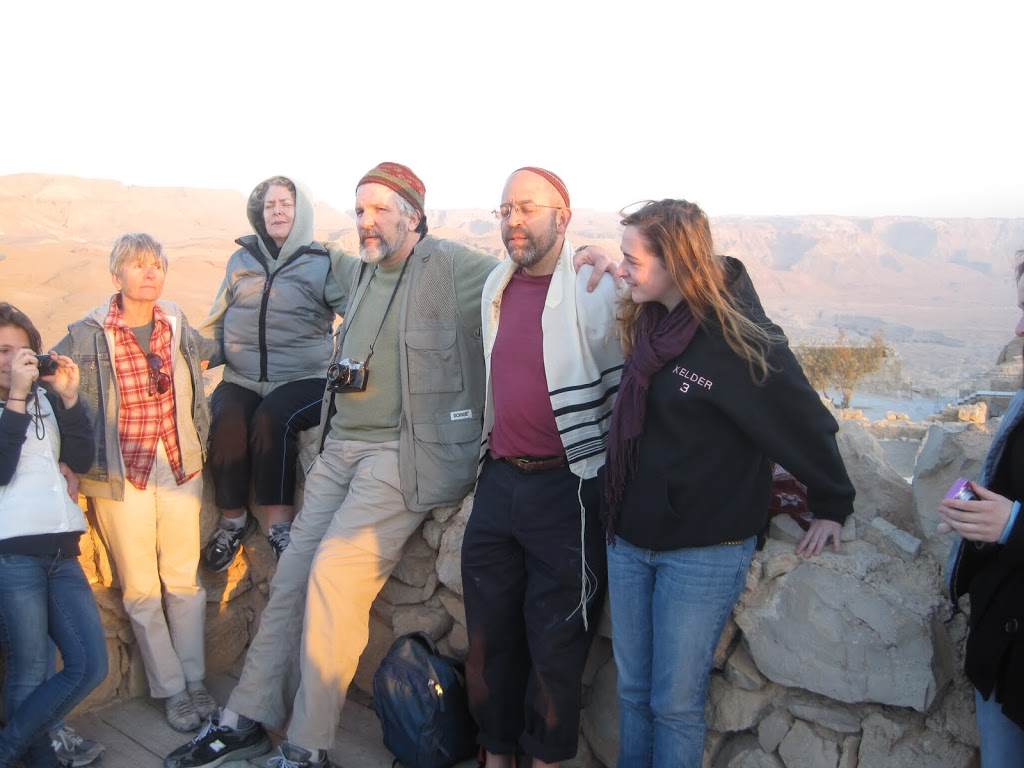 Wow. I am traveling with such a beautiful group of people, and we are having an extraordinary time together, even life changing for some of the participants. I hope some of you (all of you!) reading this missive will be able to join me on a future trip to Israel. I will describe some more of our experiences for you.

Yesterday was an exquisite marathon. We arose long before sunrise and rode the bus to the base of Masada. Masada is a flat-topped mountain on the edge of the Judean wilderness that overlooks the Dead Sea. The mighty and tyrannical King Herod built a magnificent desert refuge for himself on Masada (which means “fortress”) sometime towards the very end of the 1st century B.C.E. In the year 70 C.E. about 900 Jews from Jerusalem took refuge there. They were fleeing Jerusalem, which had been destroyed by the Roman armies as they smashed the Jewish revolt. The fighters and refugees on Masada were the last holdouts in the revolt against Roma, and a Roman legion besieged the mountain for three years before finally breaching its defenses. According to the contemporaneous account of the writer Josephus, when the Romans gained the mountaintop they found that the Jewish zealots had committed mass suicide rather than have themselves and their children slaughtered or forced into slavery. The story of Masada was made famous by Yigal Yadin’s famous archaeological excavation in the early 1960’s. Because Masada is so inaccessible, and its climate so dry, much remained untouched from 2000 years ago, waiting to be discovered and reconstructed.Frescoes and bathhouses, massive water cisterns and grain storehouses, coins, weapons and written scrolls and clay shards all told a story that could be aligned with Josephus’ ancient account.Masada became a potent symbol for the young nation of Israel: never again would the Jewish People allow a Holocaust to be perpetrated against them. The Jewish People would fight.

We climbed to the top of a citadel and watched the sky brighten. At that early hour we had the place to ourselves, except for the fearless birds looking for crumbs of food. (I remember a few years ago on Masada one of those birds actually took a sandwich out of one of our traveler’s hands and flew off with it!) The view is spectacular: sandstone canyons all around, the Dead Sea below us, and beyond the water the mountains of Jordan. We did our Shacharit service at its intended time of dawn, and just as we completed the Shma Yisrael the sun burst forth on the eastern horizon. We watched in joy and awe, and each whispered his or her silent prayers.

By now, more groups had ascended, especially Bar and Bat Mitzvah groups. There is an ancient synagogue on Masada that has been partially reconstructed but left uncovered in this rain-free environment. Many families, especially from the United States, make the arduous trip to Israel and then to this desert fortress so that their child can be called up to the Torah on this site. We heard the sweet voices of 13 year olds chanting as our masterful guide Aliza guided us around the ruins.As we pondered the mass martyrdom of the Jews in the year 73 C.E., we reflected on the essential question of how the Jewish people have survived over the millennia. How do we decide when it is time to fight to the death, and when it is time to accommodate, to flee, to bend our heads and capitulate? We prayed for ourselves and for Israel to have the wisdom to be able to discern when it is time to swim against the current, and when it is time to let the current take us.

We descended Masada and visited the ancient oasis of Ein Gedi, a canyon of incredible beauty where fresh water springs bound down waterfalls and pools on their way to the Dead Sea. Then, of course, it was time to take a float in the Dead Sea. By now we were exhausted, and many slept as the bus took us all the way north to the mountaintop town of Tzfat.

Today we toured the Northern Galilee. Instead of sandstone canyons and salt seas, the mountains are rolling and green and the fresh water Sea of Galilee can be seen far below. Tzfat is one the most important centers of Jewish spiritual teachings in the world. In the 16th century Jewish refugees who had been forced out of Spain by the Inquisition made their way to this town, as they spread out through the Ottoman Empire. The great spiritual master Rabbi Isaac Luria settled in Tzfat and a circle of disciples gathered around him. Here Kabbalah blossomed, and Isaac Luria’s mystical teachings and practices spread throughout the Jewish world. Here Rabbi Joseph Karo composed the Shulchan Aruch, the guide to Jewish conduct that has ever since been the standard for traditional Jewish practice. The stones of Tzfat hold their energy.

Of course there is much more to report, but my free time is very limited on this exciting and packed trip. I want to tell you about our moving and complicated visit with young Israeli soldiers on the Lebanese border, but that will have to wait for my next little window of time. Until then, I send you all my very best,

View all posts by Rabbi Jonathan →
Heading South
Around the Galilee: It’s Complicated…

I always leave class reflecting, thinking, inspired, and energetic. As a result, I try to be more compassionate and nonjudgmental of others. I keep reflecting on what the ancients have gone through and how their issues are still relevant today.